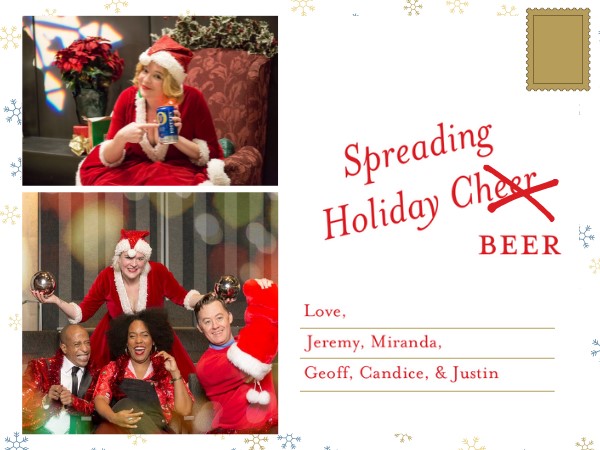 Seasons Greetings, Family, Friends, Friends with Benefits, Family with Benefits. Nope, not that last one. I’d go back and delete it, but I’m just too excited to wish you all a heckuva happy holiday season. Jeremy Dubin here, Xmas Show director, and resident Yuletide Jew…Jewletide? We’ll workshop it.

Well, 2021 has just whizzed on by, hasn’t it? Especially compared with the glacial creep of the never-ending hellscape that was 2020. I’m sure you’re eager to hear all about the various goings-on of our little Xmas Show family, so let me catch you up.

Justin, anxious to cash in on the latest get rich quick trend, dedicated the majority of the year to mining crypto-currency. Unfortunately, due to an almost complete lack of understanding of what crypto-currency is, this resulted in him spending eight months digging holes in his backyard while speaking like a grizzled 1890s prospector. Once we finally figured out what he was doing (this took a while, as his prospector-speak was authentically incomprehensible, and quite possibly deeply offensive- it seemed to contain a lot of colorful epithets about Swedes), we explained to him that crypto-currency is actually generated by computers. At which point, he promptly swiped my laptop and buried it in one of the holes he’d dug. He’s been watering it daily waiting for a “Doge Tree” to sprout. We would set him straight, but as none of the rest of us really understand how Crypto works either, we’ve decided to let him keep at it just in case it pays out. Plus it’s always nice for the little tyke to have a project.

As many of you know, it’s been a challenging year for Geoff, who is one of the tens of people world-wide suffering from Zoom withdrawal. Whereas the vast majority of us are thrilled to once again be using our computers primarily to post pictures of our pets and watch porn, Geoff found himself feeling a bit lost without the social and geometrical structure that Zoom provided. To cope, he has taken to carrying around a rectangular frame with his name in the corner which he holds in front of him whenever he speaks. He also will only mouth words silently until someone reminds him he’s on mute, and will cut off all conversations after forty-five minutes unless you want to pay extra. We’re optimistic he’ll recover soon, and appreciate your thoughts, prayers, thumbs ups and clappy hands.

Candice kept us all enthralled with the regular letters she sent chronicling her stint as a contestant on The Masked Singer. It was therefore a pretty crushing blow for both her and us when she discovered she had in fact not been competing on The Masked Singer, but rather had been employed as a roving Sylvester the Cat at Six Flags Over Utah. Apparently the application forms look remarkably similar. And adding to her confusion, for some reason Ken Jeong would periodically show up to criticize her performance.

As for our beloved Aussie Santa, she claims to have absolutely no memory of the last year, having just woken up two weeks ago at a Shoney’s in Florida with a tattoo on her neck reading “Time to do the Laundrie”.

So overall, 2021 was a mixed bag, but as they say over at Luis Vuitton, a mixed bag is better than a sh#!bag. It sounds better in French.

A Faboo Twenty-Two To You From a Jew,